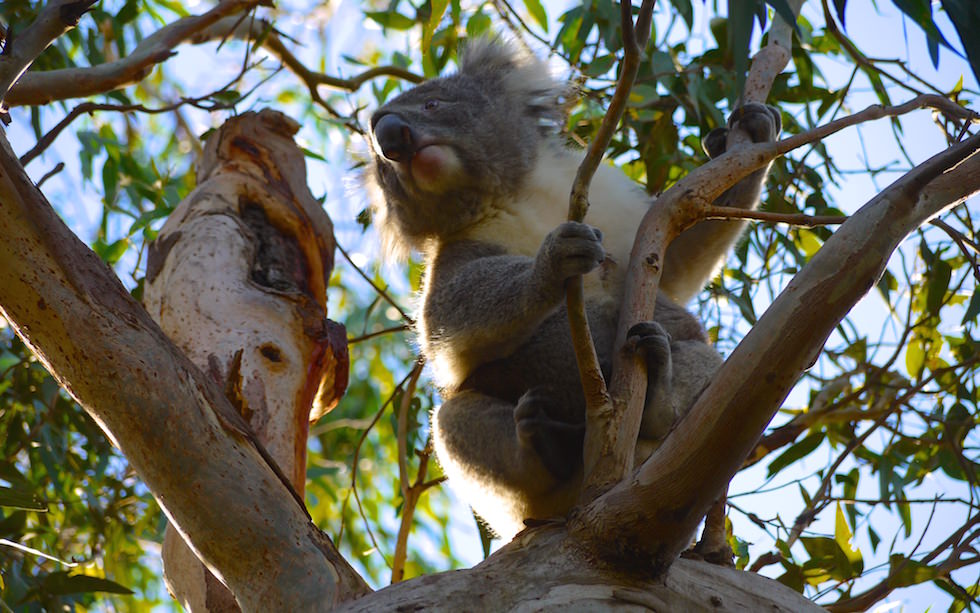 Cape Otway is situated to the west of Apollo Bay at the southern tip of Victoria’s western coast where the Southern Ocean meets Bass Strait. The area around Cape Otway is included in the Great Otway National Park where rainforests and streams extend to the coast. A rugged coastline interrupted by some pockets of sandy beaches.  This is the southernmost point of the Great Ocean Road region and the start of the Shipwreck Coast.

Most of the tourists visit Cape Otway because of all the wild koalas. Koalas are here in abundance throughout the whole area. Its the popular attraction for all wishing to see these cuddly marsupials in the wild.

Together with Kennett River it is probably the best place in Australia to see a lot of wild koalas, wallabies, birds & much more. Kennett River is easier to reach as it is next to the Great Ocean Road but if you have enough time or if you love to watch these cute koalas you should do both.

We arrived very late in the dark and had no idea where we stayed. What a great surprise seeing this awesome sunrise in the morning. There are several beautiful coastal walks you can do at Cape Otway.

But not only sunrise is stunning also the sunset on this small peninsula is breathtaking!

Cape Otway Lightstation is the oldest, surviving lighthouse in mainland Australia. Eight ships were wrecked along the coast which lead to the construction of the Cape Otway Lightstation in 1846 from stone quarried at the Parker River. The lightstation was the longest continuous operating light on the Australian mainland. 1994 it has been replaced by a low powered solar light in front of the original tower.

The Lightstation is open daily to visitors and provides a small museum too.